The Company Anubias was born in 1990 and it’s the result of a casual meeting between Mr Verter Paccagnella owner of the Comapny Euroaquarium, who was looking for an agricultural grounds on which built up a greenhouse for the growing of aquatic plants, and Mr Marino Castaldini, Maurizio Castaldini’s father, founder and owner of the Company Anubias.

The initial idea was to create the conditions to distribute inside the national territory aquatic plants, that started to have particular interest in the young Italian aquarium business. In Europe and Asia already were born companies that deal with production and distribution of aquatic plants, but in Italy no one before had thought to create a local business that could ensure to the market a simple distribution without high costs of transport.

Thanks to the experience of Mr Peccagnella, to his great number of travels all around the world and to the initiative of Mr Castaldini, the Anubias Company started on 1990 the production of aquatic plants in a structure of just 700 sq. meters where every production pallet became a bunch, or even better the foundation of what is now the Leader Company in Italy for manufacture of aquatic plants.

Maurizio Castaldini had from the beginning could count on the valuable help of his family and his wife Donatella, who since the beginning has joined his husband in this activity, by taking care with him not only of plants cultivation but also creating the current commercial structure of the Company.

The path from familiar enterprise to leader Italian company with more than 15 employees has been relatively short and it has followed the market demands, growing exponentially in the Nineties’.

Nowadays the company boast a structure of around 8000 sq. meters, of which 1500 in Sardinian committed only to Anubias cultivation and the remaining 6500 in Villanova di Castenaso, in the first suburb of Bologna.

In 2010 Mr Castaldini was pleased to hear that his daughter Silvia became partner at the top of the Company, that in the meanwhile decided to realize a new growing project. 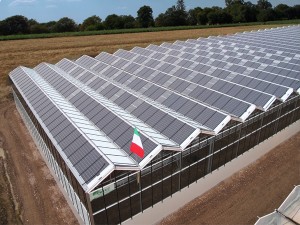 Anubias, that was always particularly sensitive to pollution problems has made an important investment for the building of a structure of 3000 sq. meters completely covered with photovoltaic panels that produce 200 Kw for self-consumption and local exchange with Enel. The new structure includes an operative area for the running and sorting of the orders, the waterworks, offices, a new warehouse and two big greenhouses. Operative since July 2011 it will allow the company to warm up and lighten during part of the winter by using only solar energy.

Doing that Anubias will contribute as other important companies to reduction of emission of carbon dioxide as waste product of combustion of raw material not renovating, main cause of environmental production.

Together with the investments, scientific research and new technologies, Castaldini’s Family decided to invest in young employees , equally located in all the areas, making the working atmosphere young and fresh, with spirit to grown up but never forgetting its well established origins. The company produces every year around 1 million of plants which distributed in Italy and in some foreign countries, for instance: Austria, Belgium, France, Greece, England, Nederland, Poland, Portugal, Slovenia, Spain,Sweden,Switzerland,Hungary,etc.If the structure and the market to which the company is addressed are constantly enlarged, the goals instead are always the same as usual: quality firstly, service and support for customers, quick management and orders distributions, packaging caring during transportation, direct contact with reseller and large choice of products.

To reach and ensure these goals the company relies to the best laboratories in Italy and Europe that produce aquatic plants starting from clones with particular characteristics that ensure an high standard and performance.

Around 80% of commercialized plants from Anubias in fact comes from InVitro production and not from nature. The remaining 20% is provided from leader companies in the South East Asia that overgrow in suitable structures according to strict agronomic dispositions and to qualitative standard that we receive weekly to refill and re-rooted in our greenhouses before sales. In this way the company is sure to propose to the market always an healthy blooming product, ready to be insert in an aquarium to give new light and colour always respecting the fishes health.

Anubias wishes to you all success and guarantee to be always a valuable partner !